Yesterday my neighbour finished off replacing the fence. He wasn’t happy with how it was. In all honesty neither was I but the house is council owned and there is no way on this planet the council would have done anything to fix it and we simply couldn’t afford it.

The reason, simply put, was that the sunken base had rotted away over time due to us having had floods in the past and with the kids next door constantly banging the ball against it and climbing it on occasion.

Anyway… TL;DR. We have a new fence. 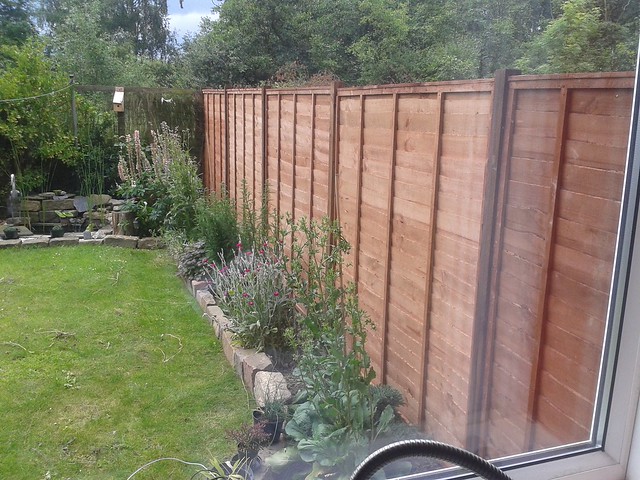 Generally speaking its a fairly good fence. OK… Its cheap… But its more than we could afford so I won’t comment on that.

It’s a strange thing though. The very problem with the original fence that was replaced is that the soil was holding water and rotting the wood. So you would have thought that they would have put in an iron spike on it or something like that. But no. The only thing that really did go well is that I seem to have managed to acquire an extra couple of inches (And we can all do with a couple more inches can’t we fellas? *wink Wink*) between my plants and the fence. 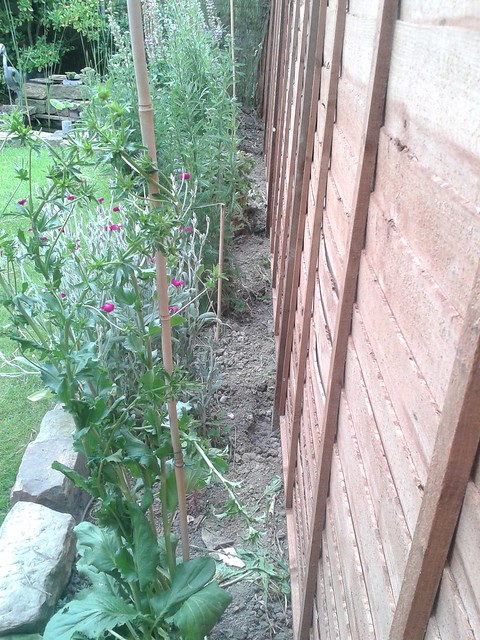 The weeds that are growing on the floor there actually used to be on the other side of the fence. At least now I have access to them and can get them out. I pulled out a lot this afternoon before I took this photo.

My only problem is that I now have a bit of a void at the back of my plants. Not sure what I need to do with it. Will I actually need to do anything with it? It may fill the space itself without any input from me, but I doubt it. I think I may take the initiative here and plant some bulbs. That way if the plants expand then no issues… If they don’t then I will have something to fill the space. I’m thinking Alliums, Gladioli, maybe a few Agapanthus or Penstemons? This way they should also fill the gaps at differing times throughout the year.

I don’t want to put in a climber. The fence isn’t mine and I don’t want to risk having it fall down with the weight of my plants. I don’t think its going to be over strong as it is. Its 8ft tall with only about a foot of wood as a footing.

Any plant suggestions would be welcomed.